I decided to take advantage of the great weather (great = not pouring rain) and take the bike down to the Burke-Gilman Trail. I haven’t made the trek since the 4th of July and was in much better shape back then. The ride down was great and we had a little picnic along the canal. Baby Rijder slept the entire time and missed the whole thing. Probably for the best because it was pretty cold out. 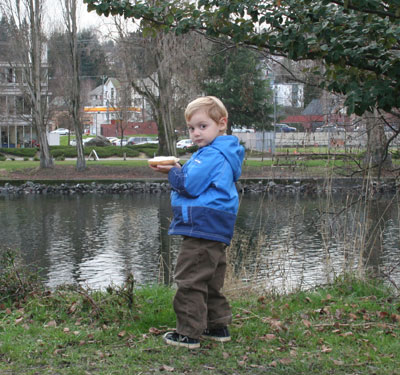 Watching boats and ducks on the canal was OK for Brandt, but he had his heart set on trains so he [slowly] took off down the trail in search of train tracks. He’s not much of a strayer so I waited on the picnic blanket for him to come back…and waited…and waited. Eventually I hopped on the bike and rode down the path to retrieve him. To appease him we packed up the picnic and rode further along the trail to a couple retired train cars that live in Ballard. That seemed to do the trick.

The ride home was a bit harder and I had to walk three blocks up Stone. I should find a convincing stopping point halfway up the hill so I can pretend I needed to pick something up at the bead store rather than admit I’m about to pass out.